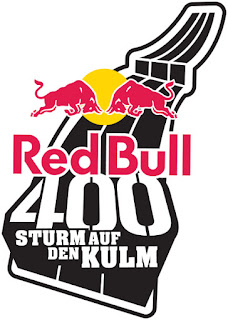 Have you ever tried to run a "full throttle" 400 m? It's bloody difficult. But...what if your quarter mile race included a sensible climb? Let's say something like 37° of maximum slope. Let's say half on slippery grass and half on the glassy concrete of a...Ski Jump! Pretty weird, isn't it? Well, this is the "Red Bull 400", a race held in Tauplitz/Bad Mitterndorf's Ski Jumping facility.
With an average gradient of 45% and a nickname of "Highway to Hell" given by the athletes, this is probably the most difficult 400 m race in the World! Take a look at the video: aren't you curious to give it a try?

We could organize a bus for next year's race! Take a look at the official website, it's an interesting collection of news and articles (they discuss, for example, the difficult choice of the right shoes for this strange competition). Just to let you know, the 2011 winner was the "Turkish chamois" Ahmed Arslan, with a time of 5'04"58. Keep on running, people!

Here you can find a list of my running-related posts. Now shut down the notebook and have a run!